Terrorist Attack in Tunisia : Dozens killed in attack on tourists 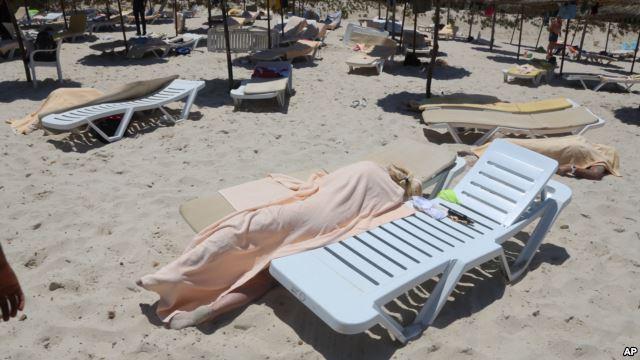 Terrorist attack in Tunisia : According to media reports , unknown persons attacked the guests of two hotels in the resort of Sousse . In newsflashes its said at least 27 people dead .

Terrorist attack in Tunisia – Two hotels in the Tunisian town of Sousse have become target of attacks on Friday . How many people died in the attack , is initially unclear : The news agencies Reuters and AP reported , citing spokesman of the Tunisian interior ministry initially more than 19 dead . Meanwhile, there is talk that including tourists up to 27 people have died. The state news agency Tap this number of victims confirmed , citing the Interior Ministry .

According to state television tourists were attacked by armed ” terrorists ” . It had been an exchange of fire between the attackers and security forces . One of the culprits have been shot .

Target of the attack was also the hotel Imperial Marhaba , it was said in Tunisian security sources . Spain’s Prime Minister Mariano Rajoy has confirmed this . Owned by the RIU chain , which is run by a Spanish family along with the tour operator TUI . The hotel is therefore exclusively known as TUI . The 366 -room property is located about three kilometers away from the Marina Port El Kanoui and approximately 14 kilometers north of Sousse .

A TUI spokesman declined to confirm that attack was in the hotel . To his knowledge after the attack took place on the beach outside the hotel. ” We do not know if TUI holidaymakers or German are among the victims,” said the TUI Group spokesman . The task forces have cordoned off the site . The TUI tour guide did not have access . Currently, the organizers have 260 guests from Germany in four hotels in the area , said spokesman Michael Röll .