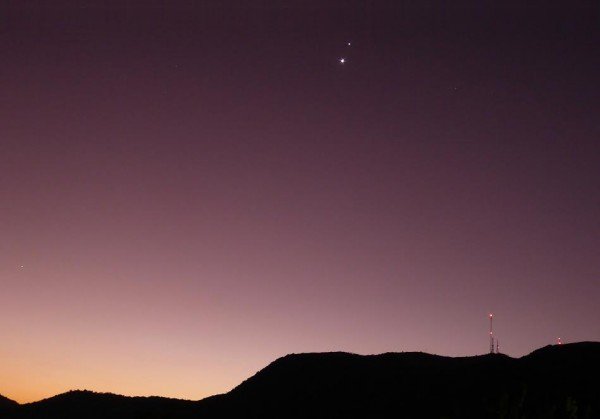 After several weeks of regular apparent rapprochement , Venus and Jupiter are closest to each other in the evening in sky : Venus and Jupiter conjunction an appointment not to be missed with the naked eye , even in the city!

After a ride of several weeks during which people can watch with naked eyes Spectacular Venus and Jupiter conjunction in the evening sky. If you looked up at the sky at the beginning of the night these evenings, you can not miss their luster twins. The two brightest planets in the sky are preparing to offer us a combination of the most spectacular. Tuesday, June 30 and Wednesday, July 1, these two celestial diamonds will be less than 0.4 ° apart, less than the apparent diameter of the Moon, that is to say, you can easily hide them with the tip of your little finger, arm outstretched toward the twilight horizon (west-northwest horizon).

Although they breed quite regularly, conjunctions between Venus and Jupiter are not always as tight; it basically depends on the position of Venus relative to the ecliptic, a line whose second planet in the solar system can deviate by several degrees. The Ecliptic is the projection on the sky of the orbit of the Earth. Moreover, Venus and Jupiter are not all the time as well positioned as this time for observers middle latitudes of the Northern Hemisphere. I said that this beautiful rapprochement is also visible in the southern hemisphere; only those located more than 60 degrees north or south latitude will struggle to observe it.

Planetary conjunctions have no physical effect on men, but the aesthetic emotions they generate are real and I can only encourage you to enjoy the return of the cool nights admire this appointment twilight . You can do it with the naked eye without any difficulty since Venus and Jupiter are currently the two brightest stars in the sky after the Sun and Moon. Alternatively , if you have them , use binoculars to scan the duo . The apparent proximity of the two planets allows to observe in the same field with a magnification of ten times.