Referendum: And if Greece chose the no … 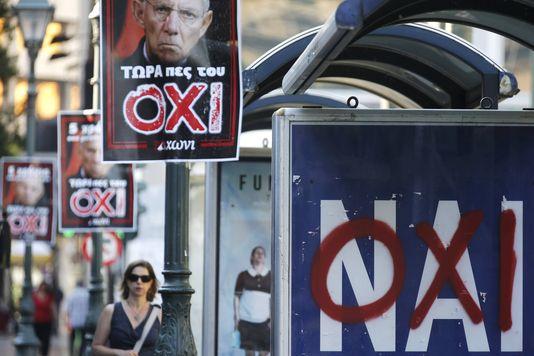 Shock! Shortly after learning in the referendum narrow victory in the night from Sunday to Monday 5 and 6 July, the President of the European Commission, Jean-Claude Juncker, brings together journalists. This is serious, we must save Europe, whatever the cost. He calls the Greek government to take its responsibilities. Meanwhile, in Athens, the prime minister, Alexis Tsipras, ignites on public television. He won. Against the IMF, against Germany. The people rejected the austerity measures demanded by the country’s creditors. A new era begins.

If this scenario were to happen, Greece would it be ordered to leave the single currency? The question on everyone’s mind. Mr. Tsipras and his turbulent Finance Minister Yanis Varoufakis, who campaigned for the non yet provide otherwise. For them, there is no doubt that the victory of non reinforce their leverage in negotiations. And enable them to quickly reach an agreement “reforms against money” less penalizing for Greece. And above all, a reduction of huge public debt of the country (322 billion euros, 177% of GDP).

The tone is very different side of Brussels and Berlin. Number of monetary union leaders consider indeed a victory not amount to a rejection of the outstretched hand of the Europeans and would end the discussion. Finance ministers themselves are likely to doubt that Tsipras government really wants to reform his country ….