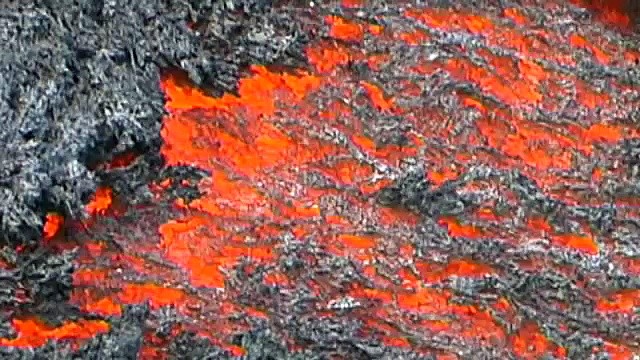 Lava flow and a dangerous run: A “lava art craft worker” runs through a streaming and still glowing lava flow on volcano Etna. The temperature of the lava was around 850 degrees Celsius. This video answers the question often asked if you can run over a glowing lava flow. Not recommended for imitation! The worker was very experienced and knew what he was doing.

What is Lava?
Lava formed in Earth’s interior by partial melting of rocks in the mantle. As the lava contains many gases and fluids in the earth, the lava is called magma. Only when the gases escape during the eruption, the magma lose the gases and turns into lava.
When first erupted from a volcanic vent, lava is a liquid at temperatures from 700 to 1,250 °C Up to 100,000 times as viscous as water, lava can flow great distances before cooling and solidifying.
A lava flow is a moving outpouring of lava, which is created during a non-explosive effusive eruption. When it has stopped moving, lava solidifies to form igneous rock.

Whether you can run over a lava flow depends on several factors. The viscosity of the lava determines whether you sink into this or not. The viscosity depends on the temperature and the composition of the lava. In basalt, andesite and rhyolite the deciding factor is the temperature. This rock melts are so dense that they can carry a person. If the temperature, however, be more than 1000 degrees, the melt is too thin to go about it. The lava at the volcano Ol Doinyo Lengai is so fluid that it does not take a person with temperatures of about 450 degrees.There I was filming a student who burned his foot when he went on a lava flow at night. The lava there is not glowing, but looks like mud.
But do not be silly, each contact with hot lava can cause awful burns. How to look like something, I filmed at the volcano Merapi. There burned a cow in a pyroclastic flow