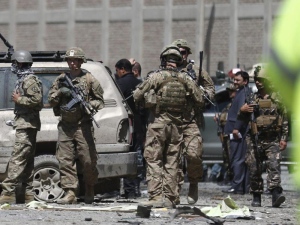 Kabul (dpa) – A suicide bomber attacked near the international airport of Kabul . An employee of the EU police mission EUPOL is dead along with the bomber.

Two Afghan civilians were also killed in the blast, said Kabul police spokesman, Ebadullah Karimi. 18 more civilians – including three children – were wounded. The Taliban has taken responsibility for the attack.

EUPOL confirmed that a vehicle of the police mission was attacked with four occupants. One of the employees had been killed, it said in the statement. The other three employees to assume that their injuries were not life-threatening. Information about the nationality of the dead did not reveal by the Eupol.

Since 2007, EUPOL supports the establishment of the Afghan police. The 23 EU member states supported mission includes more than 200 international and 180 local staff. Among the foreign EUPOL staff are also German.

A spokesman for the interior ministry, Najib Danish, told reporters that one foreign military vehicle and two civilian vehicles were damaged in the attack.

The bombing on Sunday comes two weeks after the first exploratory peace talks between the Taliban and a group of negotiators including representatives of the government,

Our correspondent says that it is clear that while talking peace, some elements in the Taliban are keeping up the pressure.