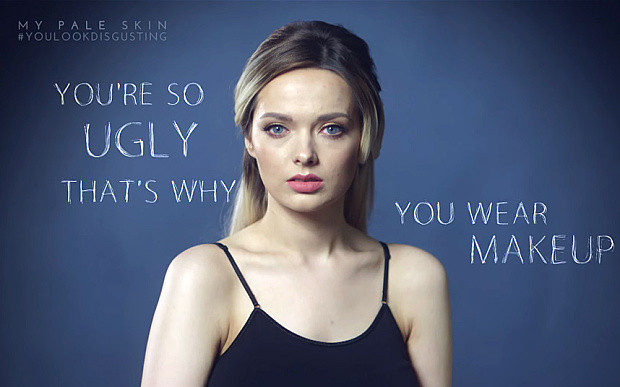 Beauty blogger with acne , suffering from a serious skin disease : Em Ford has acne . Since her unvarnished appearance before the camera she is offended by trolls . Then she has an idea .

Beauty blogger with acne received comments on her video, which can arise only in the anonymity of the Internet . Common observations of so-called trolls , which everyone knows , the slightly longer stays in reader forums large news sites , blogs or on YouTube : ” Your face is so ugly ” , ” I can not even look ,” “You look disgusting! “

Comments like this has the British Em Ford recently often get to read – in the comments section of her blog ” My Pale Skin ” . Since last year, Ford made videos of makeup tips for women with fair skin , her YouTube channel followed by more than 150,000 subscribers . In February, she made ​​her first unadorned front of the camera , showing her face without make- up, powder and mascara , but with pimples , inflammation and blemishes – acne in adults .

Since the London beauty blogger received more than 100,000 comments in the social networks . Many of her followers have admired , such as Ford ,she accomplishes to hide her acne by makeup . Lot of the comments , however, corresponded to the tenor of the detailed at the outset . What went wrong is only the devil with her ​​face , asked one ; whether they ‘ve probably ever washed another . ” Revolting ” , a user wrote on the platform Instagram pictures , ” ugly ” , ” disgusting ” .

Now Ford has turned the tables : With a short film she keeps all those who have previously left hurtful comments under their videos and pictures , the mirror in front of – and shakes at the same time to the disguised beauty ideals of our society . The video was clicked within a few days nearly five million copies . Under the hashtag ” #Youlookdisgusting ” it told thousands of people on Facebook and Twitter .