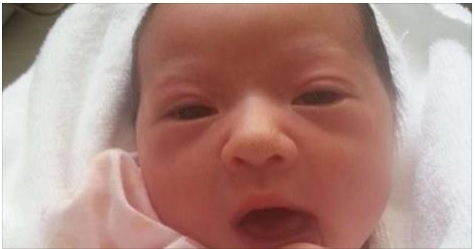 Kid Surprise Birth above the clouds for Canadian

1st class Birth in the plane

Calgary ( Canada ) / Tokyo – This baby is a gift from heaven . On the flight from Calgary to Tokyo the Canadian Ada brought Guan ( 23 ) birth to a daughter . They did not even know that she is pregnant ! Kid Surprise birth above the clouds ! Ada and her boyfriend Wesley Branch sat in the Air Canada, looked forward to a vacation in Japan.

Suddenly she complained of severe abdominal pain . The crew decided : Moving in the 1st class – and three doctors who were on board by chance , came to the rescue. In the investigation came out : The young woman is pregnant .

Ada was flabbergasted : ” I have suspected nothing , always thought I would only slightly increased . And now I suddenly realized how little did ” out of me , she reports cbc.ca. on the Canadian website.
It went straight going : Brave Wesley held his girlfriend ‘s hand , as she struggled with violent pains and the doctors gave assistance – in some 10 000 meters above Russia .
Wesley : ” Ada told me, ‘ There’s just something came out of me – Since I saw the little baby ? . I was so shocked that I fainted . ” The young father : ” When I came to my senses, I was just say ing. We have a child , I can not believe we have a child ‘
” Although the little Chloe was born over Russian airspace , it is Canadian , because their parents have Canadian citizenship.

Only a month ago Ada Guan had a home pregnancy test because she suspected she might be pregnant . But the result was negative .

After landing in Tokyo mother and daughter went to the hospital – both are doing well and recovering now. To pay the bill and future issues , the couple has started a campaign.