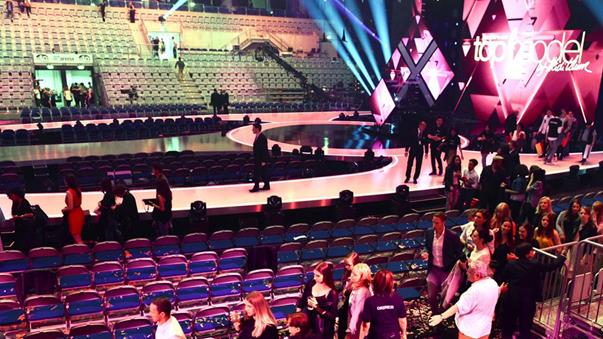 During the final show of Germany ‘s Next Top Model , the SAP Arena has been cleared . The live broadcast was stopped by the organizer in consultation with the police after a bomb threat and the discovery of a suspicious suitcase . A crisis management team of Police and Security has decided how the hall is evacuated . The audience leaves the hall very quietly and without major incidents .

The bomb threat was received by telephone at about 21 clock at the SAP Arena . In addition, a suspicious suitcase was found in one of the dressing rooms , the organizer has decided to evacuate the hall as a precaution to prevent any threat to the visitors as possible .

In the suspicious suitcase no bomb was found . We are very relieved that at night nothing bad has happened . Thanks to all helping hands : police, fire , Red Cross .

ProSieben will today decide in consultation with the jury , when and how we select the winner .