B B King, blues legend , died 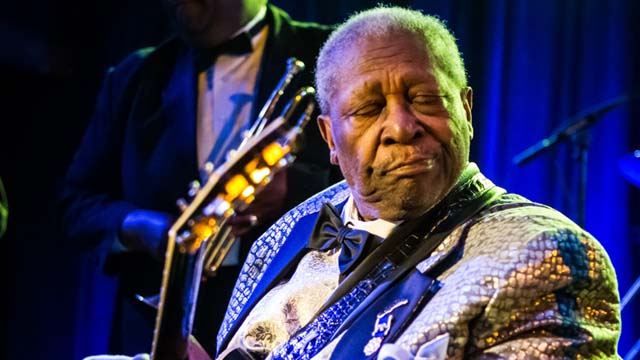 89 years old B B King, the mythical musician accumulated health concerns since last year . He died Friday in Las Vegas , leaving behind an incredible career .

This is his lawyer, Brent Bryson , who announced the sad news : blues legend has died in Los Angeles on Friday . The information was confirmed by his daughter Patty King, with CNN. B B King was hospitalized earlier this month in Las Vegas after dehydration problems , she said.

Riley B. King was born in 1925 in Mississippi , at a cotton plantation . The guitarist was also the author of the tube The Thrill is Gone.

Like many blues artists , it is through the gospel song that the young King made ​​contact with the music. He had bought his first guitar at age 12, and it is in Memphis in 1940/1950 year that his career was begun .

During his career, he made the mythical compositions as You Know I Love You, Woke Up This Morning , Please Love Me, When My Heart Beats like a Hammer, Whole Lotta Loving , You Upset Me Baby , Every Day I Have the Blues, Sweet Sixteen , Three O’Clock Bluesou encorePlease Accept My Love . But it was The Thrill is Gone , recorded in 1969 , which will ensure it a worldwide success . Many rock artists have claimed his influence , including the Rolling Stones or Eric Clapton.

Tributes showered since the announcement of his death on social networks , although it was dark in the United States .

BB, anyone could play a thousand notes and never say what you said in one. #RIP #BBKing pic.twitter.com/YvZYH8hyJE

RIP B.B. King 🙁 your music will never die! One of the first guitarists I learned about as a kid! #BBKing JBx pic.twitter.com/DqxfXchYwC

WE LOST A LEGEND… REST IN PARADISE #BBKING pic.twitter.com/9Ne5sx1Jz8

RIP BB King, one of the best blues guitarists ever, maybe the best. He could do more on one note than anyone. #respect