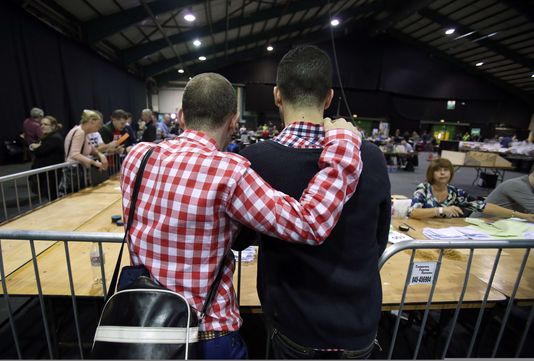 Twenty- two years before, in 1993 , Ireland decriminalized homosexuality. Now on Friday, May 22 , the same country was the first in the world to vote by referendum on the legalization of gay marriage.

On Friday May 22, more than 60% Irish voted for the legalization of gay marriage. The subject fascinated Ireland in recent months. Posters were hung on all street lights, and the turnout exceeded 60%, higher than the usual average referendums. The opposition camp has not mobilized yet as the protests against the “marriage for all” were demonstrated. The demonstration is partly political: all parties in power and in opposition, have campaigned for gay marriage.

The other demonstration is the deep change experienced by the Irish population in just two decades. This very Catholic country, where the clergy control almost all the schools gradually abandoned all the taboos of yesteryear. In 1993, contraception was liberalized, the same year that sexual relations between persons of the same sex were legalized. Divorce is allowed since 1995 and 2010, authorized the civil partnership.

Only abortion remains an almost untouchable subject. The law still prohibited, except in cases of “real and substantial risk” to the lives of women. A simple health risk is not enough. Cases of rape or incest are also excluded.