Horrible accident during the US baseball match! 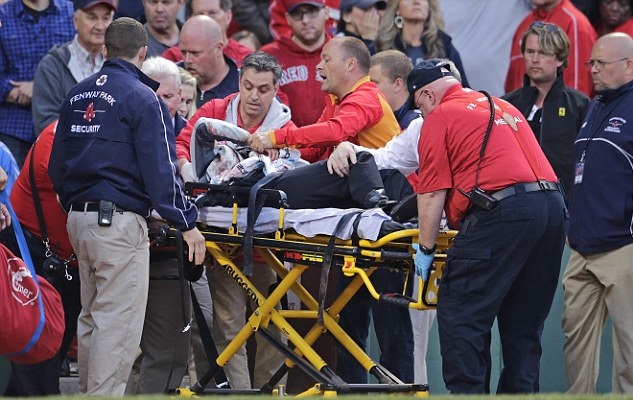 Horrible accident during the US baseball match in Boston ! Baseball fan life is in danger ! | Woman hit by broken bat.

Horrible accident during the US baseball match in Boston it was the game between the Boston Red Sox against the Oakland Athletics ( 4 : 2 ) a female fan hit by broken bat in the head and was seriously injured .

The woman who sat with her husband and son in the audience , is in critical condition now. It happened when Oakland third baseman Brett Lawrie ( 25 ) raised his arm to strike. At the moment when he strike the ball his bat breaks off and flies like a bullet into the crowd . The woman was covered in blood with severe facial injuries sent to the nearest hospital .

Bat Lawrie told the ” Boston Herald ” : ” I hope that she gets better soon. In Boston , the wetting of the ranks is very limited . “

The game was interrupted only for few minutes , but then continued . Pete Abraham from the ” Boston Globe ” wrote on Twitter : ” A policeman was holding a child in his arms and covered his eyes . It was a Horrible scene . “

Lawrie said after the incident : When you sit on the side of the first- or third base , then you have to be careful on extremely foul balls or other objects . The path to the batsman is short enough that you barely have time to react . ”
The current status of the victim is unknown . ” Our thoughts, worries and our prayers accompany them . A terrible moment , “said Boston manager Ben Cherington