From former Baywatch Actress to Countess of Devon 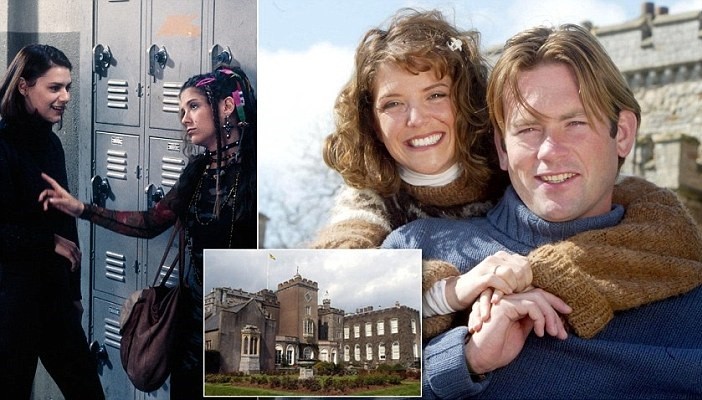 Actress Allison Joy Langer, 41, became the Countess of Devon in England on Tuesday following the sad passing of her husband Charles Courtenay’s father, the Earl of Devon, aged 73 . From Baywatch babe to British nobility: How California actress met her aristocratic, kilt-wearing husband in a Las Vegas bar and now she is an English Countess and chatelaine of a magnificent 4,000-acre castle. “After marrying Charles Courtenay, a practicing attorney and British Lord, Langer took several years off to raise two children…Spouse Lord Charles Peregrine Courtenay (30 April 2005 – present) 2 children…She married Lord Charles Courtenay in a civil ceremony in April 2005. They celebrated with a formal wedding on April 30, 2005 in Los Angeles, California. She said an interview that “We [my husband and I] met in a bar in Vegas. He didn’t know I was an actress. I didn’t know he had a castle.” – – – –

Her father is a clothing salesman, and her mother runs a company for hearing-aid distribution. Her father-in-law was the 18th Earl of Devon. As such, AJ is titled Lady Courtenay via her husband Lord Courtenay. When her husband becomes the 19th Earl of Devon, she correspondingly become the Countess of Devon.

As the new Countess of Devon, the former Baywatch babe – who starred in several episodes of the hit Nineties television show – is the chatelaine of the 600-year-old Powderham Castle, near Exeter. Her husband, 40, meanwhile, is the 19th Earl of Devon and the owner of the magnificent castle.

Powderham Castle on River Exe, was built in 1390. The Courtenays have resided there for over 600 years. Powderham houses a chair used by William of Orange for his first Parliament in 1689, following the “Glorious Revolution”.