Rugby World Cup 2015 : France easily beats Italy for its entry in the field 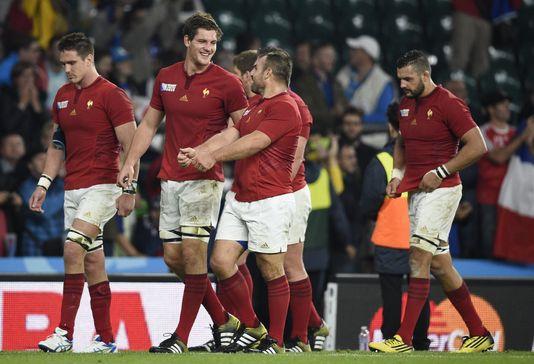 The Blues may not have the audacity to speak out , at the end of their first group match , their opponent in the quarterfinals potential ( New Zealand or Argentina ?), But it is clear that they have already done much of the road that separates the next round. At Twickenham, in London suburb , Saturday, September 19 , France easily beats Italy, the team of Philippe Saint-André beaten Italy by 32-10 for its entry in the field in this Rugby World Cup 2015. France settled for now in second place in Group D behind Ireland , ruthless Saturday afternoon faced Canada ( 50-7 )

Les Bleus – who played for the Rugby World Cup 2015 in red – remember too well misses their debut in 2007 against Argentina, for stingy on this logic victory against a little transalpine team able to compete and deprived of their usual captain, Sergio Parisse, package due to painful calf. These are two pillars, Rabah Slimani and Nicolas Mas, who have secured a part of the show in the second half and the public extirpated from the torpor that threatened despite an attempt to “Marseillaise” and ola.

Aside light strings that preceded the start of the game, the 76,232 spectators had to take their troubles patiently to glimpse some kind of show in this Rugby World Cup 2015. France has completed its first 40 minutes of a broad and strong final advance (15-3), but poor in inspiration. Lightning, however: this breakthrough Noa Nakaitaci, whose trial was denied in a pattern above.

To compensate for these offensive procrastination, all points of the first period have been registered foot: they spring from that of Frederic Michalak (7th, 12th, 28th and 40th minutes), tenured hinge alongside his teammate Sebastien Tillous Toulon -Borde, or that of the neo-Clermont Scott Spedding, a master in the art of long distance shots (38th). Unhappy twice (two of his failing penalties against the left pole), Michalak will expand its statistics to a new penalty after the break (42 ‘). A kick followed two minutes later the first French test: a service of the same Michalak, who will handle the processing, the right pillar Rabah Slimani was able to rush to score his first try in eighteen selections ( 44th).

Following the party has more elegance to the Azzurri in the spotlight. In addition to a penalty of Tommaso Allan (34th), the Italian selection – which itself was fine blue – will record a late test via a Giovanbattista Venditti (54th) upon receipt of a skipped pass . Assault which replicate the France with two of his substitutes: Morgan Parra was indeed the cause of trying to Nicolas Mas, aka “The Bus”, which rolled right axis to the in-goal line (69th).

In this Rugby World Cup 2015, after Stripped of the Italian shoe-trape, France will continue its road facing two opponents of lower tonnage, Romania (September 23) and Canada (1 October). Winning two games supposed that the Blues probably will play without their winger Yoann Huget, crying out after injuring his right knee in the 54th minute.

The challenge now is to know in reality how will behave the Blues against Ireland. Sunday, October 11, this clash should determine which of the two qualified teams will finish second in Pool and will face in the quarterfinals the leader of Group C, supposedly New Zealand, defending the title Webb Ellis trophy.

In 2011, the XV of France had left referee Craig Joubert Final defeat against the same New Zealand (8-7) with the annoying feeling of having lost by the fault of his whistle to it as such escapes from the seven previous editions. Four years later in this Rugby World Cup 2015, their reunion with the South African referee will therefore have seen a happier outcome, failing to have been triumphant.