The fall of Palmyra 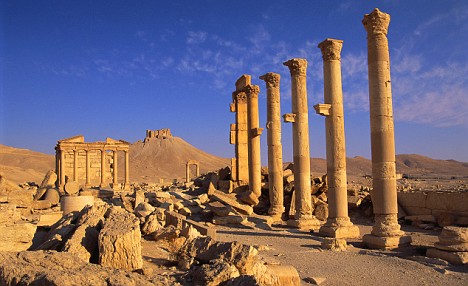 The fall of Palmyra, the ancient jewel since 2000 years

The Islamic state is expanding its area. The so-called jihadist group has seized Thursday, May 21 the city of Palmyra in Syria. The fall of Palmyra, one of the oldest cities of more than 2 000 years raises fears for its invaluable ruins classified as a World Heritage Site , it also represents a significant victory for the terrorist group in the region.

” IS fighters” are in all parts of Palmyra ,” said Thursday the Syrian Observatory of Human Rights ( OSDH ) . After reaching a first time to push the jihadists outside the city, at the end of last week , the forces of the Syrian regime retreated Wednesday massively leaving the locality. The insurgents took the opportunity to seize the air base, the prison and buildings of Syrian security services , according to OSDH . Thursday, the jihadists have entered the archaeological site of the city.

By Thursday , the jihadists have carried out further executions, according to OSDH . At least 17 people were killed and some decapitated , from weighing down the balance of the battle for the city which had already been at least 462 deaths, including many civilians . Many residents fled to the cities of Homs and Damascus.

Islamic State is controlling half of Syria

For the Islamic state, it is a decisive conquest. This is the first major city (70 000 residents, center and periphery alike) it takes the forces of President Bashar Al-Assad. By seizing the town and the vast desert region that surrounds it, the jihadist organization can now claim control of half of Syria and threatens Homs, the third city of the country at war since 2011.

The city of Palmyra is also a strategic bolt for Islamic State militants as it opens to the great Syrian Desert. On Thursday evening the IS has also taken control of last checkpoint between Syria and Iraq, located 240 km from Palmyra, according to OSDH. Syrian government forces have withdrawn from the border post of Al-Tan – known as the Al-Walid on the Iraqi side – in the Syrian province of Homs. Contacted by Reuters, a jihadist of the IS confirmed this.

The impotence of the international coalition

Despite an air campaign launched since 2014 by an international coalition led by the United States to counter the IS in Iraq and Syria, the strength of strokes taken in eight days by the terrorist group in Ramadi , Iraqi strategic city fell Sunday and Palmyra, show the limits of this strategy.

On Tuesday, the spokesman for the White House, Josh Earnest , tried to relativize the consecutive and consistent progress of IS , noting that Obama had always said that the fight against the Islamic state would be long and that it would include ” advanced ” and ” setbacks “

Facing with the alarming inroads of IS in Syria and in Iraq , the French government had announced an international meeting in Paris to be held on Wednesday June 2 , . According to a diplomatic source , two dozen ministers or representatives of world organizations will participate, including US Secretary of State John Kerry.