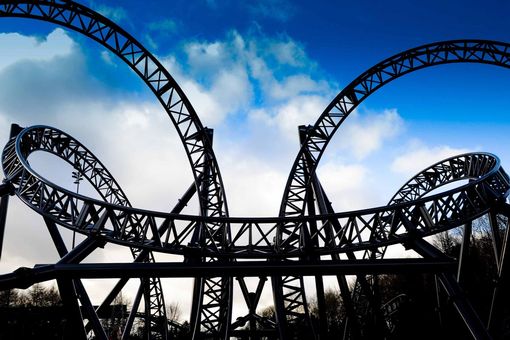 The roller coaster ” The Smiler ” in Britain moves up to 85 kilometers per hour and has 14 loops . Now there was a worst crash in the popular extreme roller coaster – it’s just one of many .

Visitors to the park said that there had been technical problems with the roller coaster since early morning . Then an empty car was sent to test , is said to have then caused the crash .

All 16 passengers of the car were injured , four of them seriously , said a spokesman for the emergency services . The area around the roller coaster had been vacated .

As the British broadcaster BBC reported that the four passengers were seriously injured two young men and two young women accordingly, they suffered serious injuries to the lower limbs . Some passengers said to have been caught according to the BBC for several hours in the roller coaster . An employee spoke that it is “the most serious accident in the history of the amusement park ” . Alton Towers is one of the most visited Parks of Great Britain and known for its exceptional rides . Nearly 25 -million-euro rollercoaster was opened in May 2013 . At the opening , there was an incident , stuck in the cars and had to be lifted from the rails . The railway was closed briefly because of a series of glitches in August and November 2013.

This is why I don’t get on rides at places like #AltonTowers. Life is dangerous without risking it for a 3min buzz pic.twitter.com/Qv0M75IItQ