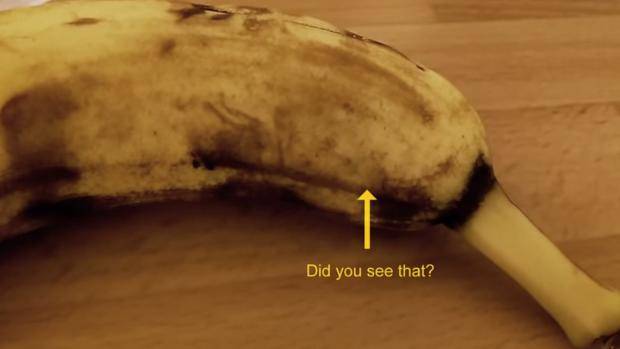 A man wants to eat a banana . It is long overdue . Suddenly something moved . The man takes his camera out , holding it and experienced a surprise . He knows that he will never eat this Horror banana !

A new video on YouTube has a nauseating scene of Horror banana : lying on a table a little over ripe banana , which is filmed with a shaky camera . The author of Filmchens explained with text overlays , that he only wanted to eat a banana . Then he points to a spot on the fruit that occurs to him seems strange . The point moves minimal, but long nothing happens .

Slowly, then the shell opens slightly , elongated black hairy legs appear. The hole is getting bigger a big spider jumps to the very end on the table . The clip ended the YouTuber with the lapidary text that he had but ultimately eaten an apple .

The video liked by so many spectators also have spoiled the appetite for the healthy fruit . Again and again there are reports that migrant spiders in banana covers , the long journey from the tropics to survive and end up in the local supermarket shelves . The poisonous eight -legged friends are in fact not only for many people scary , but also dangerous. But the video of Caleb Lechowski is an amazing chance for observation .