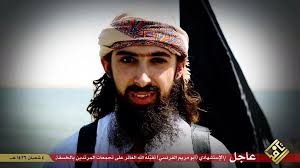 The Jihadist Kevin Chassin is dead

The Jihadist Kevin Chassin died in a suicide attack in Iraq

The self-styled Islamic State announced on social networks the death of two French jihadists – including a Toulousain, the Jihadist Kevin Chassin – in a suicide attack against an Iraqi army base on Friday morning, al-Khasfa. Small town west of Haditha in Anbar province, where terrorists have recently won Ramadi, Iraq’s third largest city. According to official reports, three hummers loaded with explosives were destroyed during the attack, and seventeen jihadists killed, two French: Abu Abdelazizi and Abu Maryam, the latter being better known as the Jihadist Kevin Chassin.

Kevin was not belongs from Muslim family . He had grown in Bourbaki city , Toulouse, where he eventually switched to radical Islamism. Toulousain Abu Al-Aryam Fanraci before these converts had appear on a propaganda video of the Islamist state burning their passports late November? Perhaps the curious who had discovered the Facebook profile of Abu Al-Aryam Fanraci where he proudly holding a decapitated head and promised: “We arrive France, there has heads that will fall!” Toulousain 24 year s’ real name is Kevin Chassin. He had nothing to do with large groups of Mirail or Izards but between firecrackers and petty crime, he switched to radical Islam. Why? What? Parents, relatives facing these departures are wondering. It seems that it will never give the answer to these questions, even if we still remain cautious and wait for an official confirmation of his death by the French state .

Botox for Eyebrow Lift – Everything You Should Know

How to Lose Face Fat Naturally?