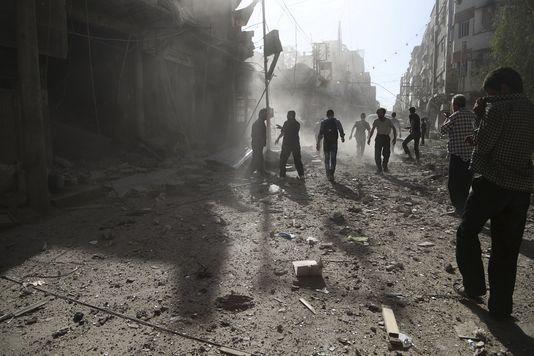 While the Syrian army has used for the first time Wednesday, September 23 drones supplied by Russia, French President Francois Hollande called for the organization of a new UN conference on Syria, following those of June 2012 and February 2014.

“For the first time, the army has used drones today received from Moscow in operations against extremists in the north and east of the country,” said a security source in Damascus, without specifying the type of drones used or on the regions where the operations took place. So far, there had been reports of the use by the Syrian army of Iranian drones, less sophisticated, in particular ad hoc operations in the suburbs of Damascus.

The use of Russian drone is a further illustration of the strengthening of military support from Moscow, which reinforces its support to the Assad regime with the hope to resume the ascendant military on jihadists and rebels.

This increase in Russian power for weeks alarm the United States, whose chief diplomat John Kerry spoke about it three times in recent days with his Russian counterpart Sergei Lavrov.

The presence of Russian troops in Syria, betrayed including by selfies posted on social networks by young soldiers deployed in the country , Moscow was forced to confirm, September 9 , the presence of certain of its nationals in the country led by Bashar al-Assad . The spokesman of the Russian Foreign Ministry spoke of “military experts” present on the ground.

Russia justifies this by the need increased support to fight more effectively against the jihadist group Islamic State (ADRs ) representing Moscow as the main threat to the stability of the Middle East. Moscow believes that the international coalition led by the US , which conducts raids in Syria and Iraq, failed to actually roll back .

“at least five combat aircraft, reconnaissance aircraft (…) and sophisticated combat equipment to fight the IS”.

Indeed, in recent days, the Syrian Air Force has stepped up its strikes against positions jihadists, particularly on and around Palmyra, a town in central Syria controlled by IS since May and known in the world for its ancient city in the desert. At least 12 civilians were killed and dozens wounded in the bombing, which also caused the death of dozens of jihadists, according to the Syrian Observatory of Human Rights (OSDH).

Weakened in recent months both in terms of staff that the material, the Syrian army tries to regain lost positions in several regions from IS but also from rebel groups.