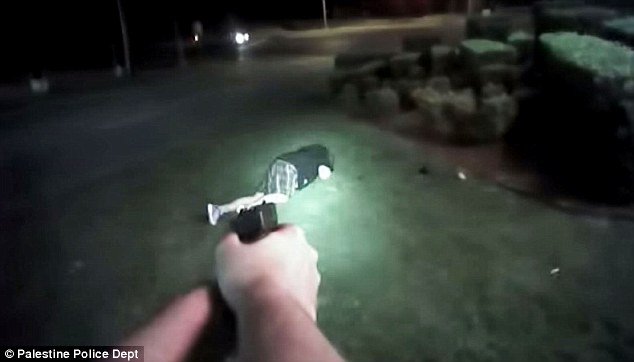 Terrifying escalation of violence as compliant drunk man marched out of Applebee’s suddenly suspect pulls BB gun on cops, who riddle him with bullets in front of speechless diners

TORONTO – A pair of Texas police officers that shot and killed a suspect in May have been acquitted, both by a judge and the court of public opinion, after dramatic footage was released that shows a man pull out a gun and motion towards them.

Officers from the Palestine Police Department were called to a Walmart Supercenter on May 31 with a report of a white male wearing tan shorts and a black shirt that had allegedly stolen beer and made his escape in the direction of a nearby Applebee’s Restaurant.

Sgt. Gabriel Green and Officer Kaylyn Griffin searched the restaurant and found James D. Bushey, a man who matched the suspect’s description, washing his hands in the bathroom.

“What do you need?” Bushey could be heard asking the officers.

“You’re a suspect in reference to a theft case. I need you to step out please,” Sergeant Green replied. “Don’t act dumb for me. Come on and step out. Okay? You’re on video.”

As Green and Griffin escorted Bushey out, a body camera captured Green move a set of utensils out of reach of the suspect. But his attempt to avoid violence failed moments later as the group left the building.

“Gun! Gun! Gun!” screamed Griffin as Bushey pulled out what appeared to be a pistol. Sgt. Gabriel Green’s body camera captured the moment James Bushey pulled out a concealed weapon and attempted to fire it a police officers.

Both officers fired multiple rounds at Bushey, who was later pronounced dead at a hospital.

“It’s very unfortunate that the police officers were put in this position,” Palestine Police Captain James Muniz told to news agency on Tuesday. “They felt that they had no choice but to defend themselves at that time.”

It was later revealed that suspect pulls BB gun on cops, a BB gun made to appear like a real firearm.

“Although the initial investigation has revealed that the gun the suspect brandished was a BB gun designed to look like a 9mm handgun, in the rapidly developing situation the officers took appropriate defensive measures in using deadly force against the suspect to stop the threat”, said Palestine PD Chief of Police Mike Alexander in a statement.

“People may ask the question, ‘Why did the officers have to shoot so many times?’ Well their adrenaline kept them shooting until they were safe,” Muniz added in a report by the Palestine Herald-Press. “Really no officer knows how many shots they are taking until the situation is cleared.”

Green and Griffin were initially placed on administrative leave while an investigation into the incident when suspect pulls BB guns on Cops and they shoot him dead was conducted. They have since returned to duty, according to a CBS report.