Science & Technology : This rat paw was grown in the laboratory 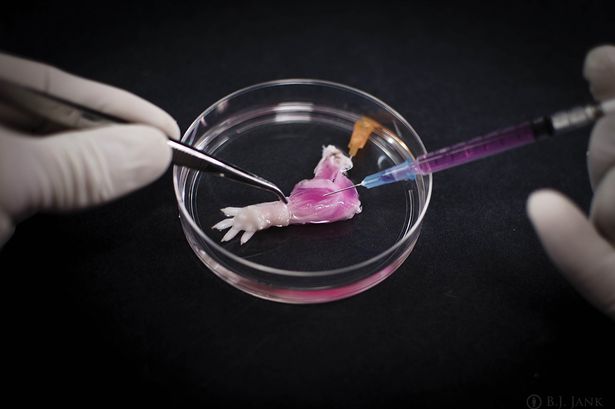 For the first time a rat paw was grown in the laboratory by US researchers – including functioning vessels and muscles . In the future, people could benefit from it .

Millions of people have to live with artificial limbs worldwide. Some come reasonably cope with it , others not only face medical problems for the ” spare parts ” . Therefore this is the dream of scientists to breed all body parts from the tissue of a human . The experiment of the physician Harald Ott is a small step in this direction : For the first time a rat paw was grown in the laboratory by US researchers from the Massachusetts General Hospital in Boston – including functioning vessels and muscle tissue .

“Breeding of the complex nature of human limbs is a special challenge”, Ott describes one of the problems in the scientific journal “Biomaterials”. Because muscle, cartilage, bone, blood vessels, tendons, ligaments and nerves – all that needed to be “recreated” – and each part requires a different so-called support structure.

In the process for living cells of a donor organ to be “washed out” . What remains is said support structure, which is then populated with cells of the future organ. In this way, researchers have already regenerated kidney, liver, heart or lungs from animal models not only at Massachusetts General Hospital. The rat paw but is the first renewable limb.

And: Even muscles grow after an electrical stimulation of the paw, the researchers noticed as much as 80 percent of reactivity, as is seen in newborn animals. The vessels were also fix filled with blood. Remains to be seen whether the body of the rat paw takes the long term.

Ott and his team look into renewable limbs a further advantage if the method can be applied one day in humans: rejection would thus no longer an issue. Who gets far transplanted organ, must take medication all his life for this very reason .

However, fellow researchers slow the euphoria. “For such a complex organ as the hand there are so many different tissues and functions that this procedure is not a viable option”, says Oskar Aszmann of the Medical University of Vienna. He has invented a bionic hand, which can be controlled by their owners by thoughts. In a “renewable source” for example, would have to be replicated thousands of nerve fibers – and this was an insurmountable problem. For Aszmann Ott’s method is indeed worthy – but currently more of an academic debate and far from clinical application.

The research team led by Harald Ott is dedicated to become a bit bigger: The next goal is the breeding of a baboon paw. One of the new challenges are then nerves: They also require prior to use in humans even greater attention.