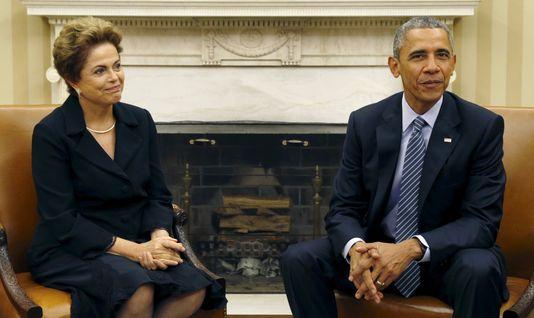 Tuesday, June 30, US President Barack Obama and his Brazilian counterpart, Dilma Rousseff, called  in Washington at the conclusion of a global agreement “ambitious” climate , affirming their commitment to greater emphasis on renewable energy.

In a joint statement regarding a global agreement, the two leaders stressed that countries’ commitments on greenhouse gas emissions must be “regularly updated ” in the coming years, bearing in mind the goal of the international community: limit rise in warming to 2 ° C compared to the pre-industrial era .

The two countries shall in particular be raised to 20 % by 2030 the share of renewable energy (excluding hydropower) in their total electricity production . In 2014 , the figure was 7% for the United States.

World emitter of greenhouse gases , China has in turn confirmed on Tuesday its commitment , announced in late 2014 during a visit of Obama in Beijing, to cap its CO2 emissions by 2030 .

At five months of the 21st UN Conference on Climate Change ( COP21 ) , which begins on 30 November in Paris , the world’s largest emitter of greenhouse gas in 2006 – it alone represents 25% of the world total – fixed goal of ” reaching the peak of its CO2 emissions by around 2030 while trying to reach at the earliest .”

On Monday, UN Secretary General Ban Ki -moon said that the pace of UN negotiations was ” far too slow “. “This advance at a snail’s pace,” he lamented .