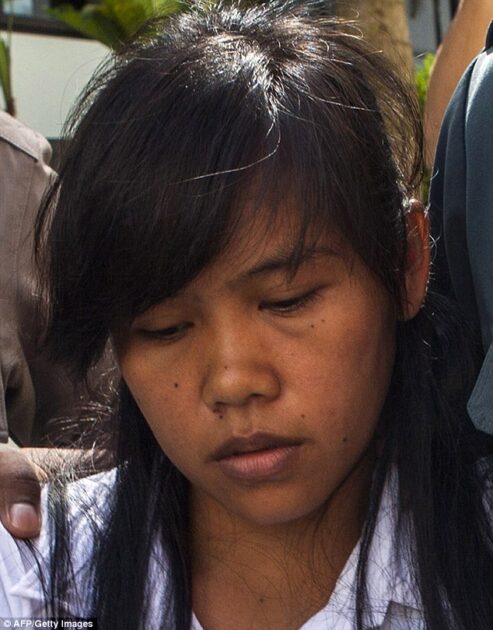 Jakarta ( Indonesia ) – Mary Jane Fiesta Veloso ( 30 )  her two sons Mark Daniel ( 12 ) and Mark Darren ( 6 ) had already been adopted. She was waiting for the Indonesian prison island Nusakambangan their execution , when her life was spared at the last minute – at least for now !

While eight other drug traffickers were executed shortly after half past twelve on Wednesday morning ( local time) , the Filipina was again a postponement . This was announced by the Indonesian Attorney General Muhammad Prasetyo .

The execution of Mary Jane has been postponed due to a request of the Philippine president , “said Tony Spontana , the spokesman for the prosecutor . The shooting of Veloso was initially canceled , as they should testify in a trial against the alleged smuggler Maria Kristina Sergio .

Sergio had surrendered on Tuesday, few hours before the scheduled execution of Veloso , the Philippine authorities . Sergio said to have other people abused as drug couriers – maybe Veloso ?

With around 2.5 kilos of heroin in his luggage Veloso was nabbed at the airport in Yogyakarta , as they einreiste to Indonesia in April 2010 . There she wanted to work as a housemaid . Veloso had always argued that she had been exploited without their knowledge as a drug trafficker . This claim could now be substantiated in a court hearing. However, Sergio has no plans to make a confession in court rather, she want to prove her innocence. Attorney General Muhammad Prasetyo told a news conference , the executions were carried out in the early hours of Wednesday from a 13 -member firing squad .

After the execution , the Australian government has recalled its ambassador from Jakarta . ” We respect the sovereignty of Indonesia , but we condemn what happened , and we can not just be business as usual ,” said Prime Minister Tony Abbott to justify . The relations between the two countries have been damaged.

Indonesia is among the countries with the most stringent drug laws worldwide. In January , six people were under international protest been executed for drug offenses , including five foreigners .

Despite appeals by UN Secretary General Ban Ki Moon and other politicians President Joko Widodo maintains the executions , which are necessary for its representation in order to combat a national emergency because of rising drug use .