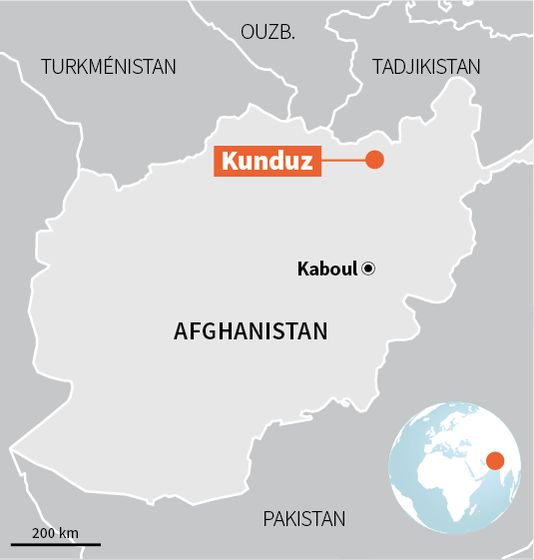 Wednesday, September 30 , the Afghan army continued to trample in Kunduz , a large city of the north Afghanistan, now is under control of Taliban . The Taliban took over the city in a few hours , apparently easily overflowing 5 000-7 000. From 400 to 2000 soldiers were present there when Taliban attacked them according to various estimates .

Government troops responded on Tuesday and launched their offensive against an attempt to dislodge the insurgents in Kunduz but the recovery is quite difficult , ” the enemy are using people as human shields ,” said President Ashraf Ghani .

Special forces of NATO ‘s mission were deployed to help their Afghan counterparts . A Western military source, who requested anonymity , said it was particularly US elite soldiers , British and German , which are part of the 13,000 foreign soldiers still deployed in the country .

According to Afghan intelligence services, the US bombing near the airport have killed Mawlawi Salam , head of the Taliban in Kunduz province along with his deputy and five other fighters . An airstrike also killed four civilians on board of a car.

If the US bombing used to contain the Islamist fighters, the Afghan army, which can no longer rely on the support of NATO troops on the ground, awaiting additional reinforcements.

The fall of Kunduz, of course, “a setback for the Afghan security forces,” said Tuesday the spokesman of the Pentagon, Peter Cook. But they “have met in recent weeks and months to the challenges” of the Taliban, and “we have confidence in their ability to return to Kunduz Taliban”, he assured.

But the lightning defeat of Afghan troops revives old wounds in the United States, including the memory of the fall of Mosul, Iraq’s second city, in June 2014, when the city fell in a few hours in the hands of Islamic State while Iraqi forces were fleeing.