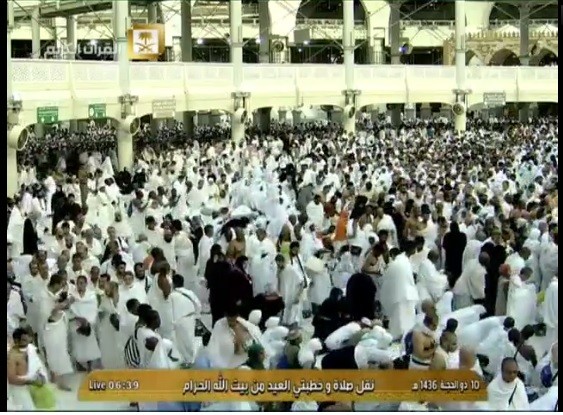 The Eid al-Adha, “Festival of Sacrifice” also known as Eid alKabeer “the big Eid”, in contrast with the Eid el-seghir called Eid small, is the most important festival Islam. It takes place on the 10th of the month of dhou al-Hijjah , the last of the Muslim calendar, after waqfat Arafa, or station on Mount Arafat and marks the end of the annual hajj

The day of Eid al-Adha is a day of celebration in the Muslim prophetic tradition. Indeed, from the announcement of the vision of the new moon, Muslims glorify God’s greatness by takbir.

This year the day of Eid al-Adha is on September 24.

This holiday celebrates the devotion of Ibrahim, the Judeo-Christian Abraham, whom God has asked to sacrifice his son (Ishmael for Muslim Isaac for Christians and Jews).

When pass the act, God would have sent a sheep through the Angel Gabriel to replace the son of Prophet Ibrahim. Muslims are invited during Eid al-Adha to sacrifice a sheep in a precise ritual.

Dates on the Muslim calendar vary depending on the phases of the moon observed locally, the day of the celebration of Eid al-Adha varies geographically depending on when the full moon is observed.

The sheep to be sacrificed , must not be blind , or have the cut and above all it must have less than one year of age tail. Beyond that, the lamb is no longer proper to sacrifice the eyes of Allah .

The sheep must be slaughtered specifically the tenth day of the month of Dhu al-Hijjah , the twelfth lunar month of Islam , marked by the hajj ( pilgrimage ) to Mecca. It occurs the next day ( the ninth day of Dhu al-Hijjah , so) the passage of the pilgrims in the plain surrounding Mount Arafat , 20 kilometers from Mecca , an obligation of Hajj .

The sacrifice must also take place after the Eid prayer. Then only the priests can officiate . Must perform the Eid al-Adha that those who can afford it .

” When you slaughter an animal, slay good” : this is a hadith which prescribes . The lamb ‘s head should be facing Mecca, then the priest shall pronounce the ritual prayer ” Bismillah Allahu Akbar ” (” By the grace of God, God is great” ) before making his office . He may also announce aloud to which will be slaughtered sheep.

According to tradition, the animal can not be stunned and sheep should not see the blade that will cut his throat , but the knife has to be quick and precise so that the animal does not suffer.

Sura “The Pilgrimage ,” the Qur’an says : ” Eat in yourself and make it eat the distressed ones .” Which resulted in manners rule of thirds , observed by some Muslims : one third of the sheep for themselves , one third as gifts to friends and neighbors and third as alms for the poor.