“You hurt me , you hurt a lot of people but I forgive you, I forgive you .” Dylann Roof , flanked by two heavily armed guards , remained unmoved by the words of the daughter of Ethel Lance , 70, one of the nine victims of the Charleston killings.

Bowl cut and stare, striped inmate uniform, the young man to the youthful air was served his charges and his imprisonment. The alleged killer of 21, appeared , Friday, June 19 , interposed via video from jail for a perfunctory hearing. He faces the death penalty against Charleston Killings, which is still in force in South Carolina. Dylann Roof, 21, seen in a police photo after his arrest, has reportedly confessed to the shootings.

” May God have mercy on your soul”

Relatives of the victims were in the room. Several , sobs in his voice, spoke missing while asserting “forgive” the young man. ” May God have mercy on your soul” , told the mother of one victim , Tywanza Sanders. He was content to confirm his identity , and declaring that he had no job. He is charged with nine counts of felony murder and one charge of possession of weapons in connection with a violent crime.

After his arrest during a traffic stop about 400 kilometers from the site of the massacre , Dylann Roof confessed all the facts and stated , according to two officials of the security forces Friday cited by CNN, wanting trigger ” a war between the races.”

A few hours after this appearance , hundreds of people paid tribute to the nine victims of the young man , described as a white nostalgic apartheid . A ceremony organized by the city in south- eastern United States , brought together blacks and whites in an indoor stadium of the College of Charleston .

Fifty relatives of the victims were in the forefront . The audience chanted including ” We Shall Overcome ” ( we shall triumph ) , the emblematic song of the markets for black civil rights in the United States .

Friday , Obama said meanwhile that the Charleston killings showed that the “scourge” of racism is still present in the United States . “The apparent motivations of the shooter remind us that racism remains a scourge that we must fight together ,” said the first black president of the United States , speaking at the US Conference of Mayors . 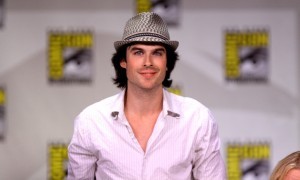 Ian Somerhalder refused to take pictures with his ​​fans in Paris!