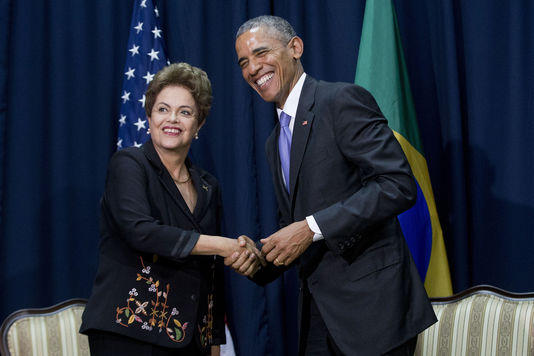 Brazil’s foreign policy – Brazilian top in the US , Dilma Rousseff wants to turn the page .

Brazil’s foreign policy – To a reporter who asked at the Summit of the Americas in early April in Panama, though her official visit to Washington scheduled June 30 meant the end of the episode of American plays conducted by US intelligence in Brazil, President Dilma Rousseff replied in a broad smile: “That means we have accepted the measures taken by the United States … that the friendly countries are not spied. And we have a statement from President Obama: if he wants to know something, he will pass me a call. ” Answer the least laconic to a serious concern, shed in front of the news by the dramatic revelations of Wikileaks this week on espionage last three French presidents.

This confidence displayed Dilma Rousseff to the United States contrasts sharply with her cold anger expressed there are less than two years. In September 2013, Edward Snowden revealed that the NSA had spied communications of Rousseff, and her close associates, but also dug into the data of the largest company in Brazil, oil giant Petrobras.

The president then emerged as one of the most critical voices …